The FF fandom has been patiently...(would you say waiting ten years, angrily mind you, for even the slightest trickle of information to make sure the project was still alive be considered patient? I think so) and the wait has paid off. Maybe. The game could still suck, but really ten years of buying hardware to just have a chance to play the next, potential, epic from the Final Fantasy team...I'm having troubles keeping my excitement in check!

But, must contain myself enough to finish this article. So! Square-Enix has announced the release date for the PlayStation 4 and the Xbox One as September 30th, 2016. In addition to that tidbit of information, they also announced 2 different Collector's Editions. 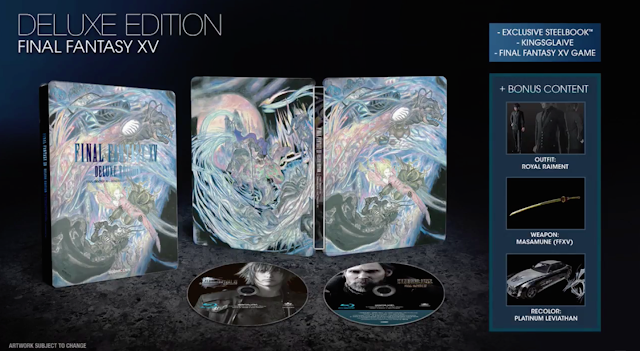 In the Deluxe version of the Collector's Edition you get some goodies for Noctis in game like an outfit and weapon skin. Plus you'll get a recolor for his car. But the coolest part of this package is obviously the artwork on the steelbook case for the game!

Now if you're lucky Square-Enix will feature the Final Fantasy XV Ultimate Collector's Edition exclusively on their site for pre-order. And with it comes... 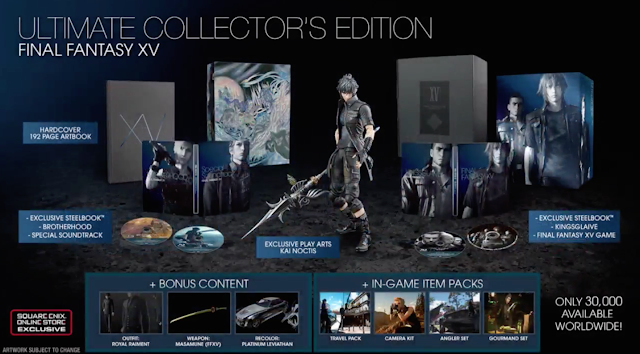 So you get everything that is in the Deluxe Edition, plus...um...quite a few other items. Like a statue of Noctis from Play Arts. You get a (admittedly not as cool) stylized steelbook cases for the game. BUT WAIT! THERE'S MORE! The soundtrack is included with it's own stylized character art case! PLUS a 192 page hardcover artbook. In addition to a slew of in game goods to partake in.

What do you think of this news? Let us know in the comments below and over at Facebook!