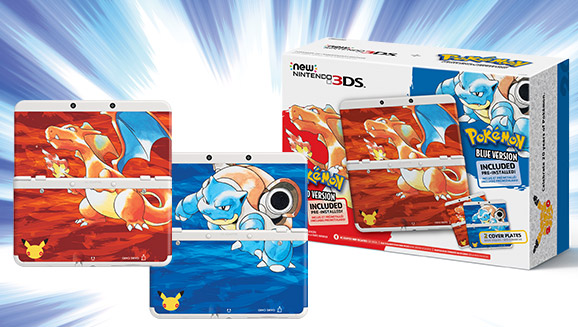 To help celebrate Pokemon's 20th Anniversary a New Nintendo 3DS has been announced for us here in the U.S.  This 3DS will come with two interchangeable face plates, one featuring the classic representation of Charizard and one of the classic Blastoise.  For those who don't remember or never knew these are the images used for the original box art for Pokemon Red and Blue when they were first released.

Anyone who purchases one of these will get BOTH Pokemon Red and Pokemon Blue pre-installed and ready to play. Two exclusive themes will also be included pre-installed as well.  For hardcore Pokemon fans this is most certainly a necessity to own.  Since it is considered a special edition we will have to wait and see how many are actually planned for sale but hopefully quite a few!  No specific detail on where this will be available for purchase, the report from the Pokemon website says "participating retailers" for now.

This awesome New 3DS will be released on the same day the originals were released, February 27th.  On the same day Pokemon Red, Blue, and Yellow will become available for purchase from the 3DS Nintendo eshop for $9.99 each.

Keep checking in for future developments on when and where you can pre-order this New 3DS.

Pre-Order sales for the Pokemon New 3DS have gone live at Gamestop follow the link below to reserve yours!