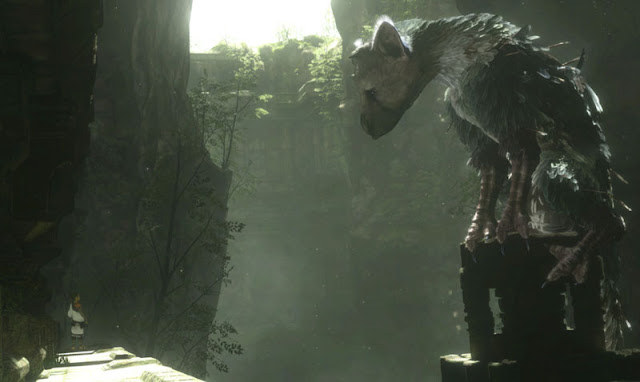 Sony wasted no time in re-revealing one of the most hyped and rumored games of the last 5 years. That's right, The Last Guardian is finally confirmed to be alive and well and on it's way to us sometime in the year 2016. This revival, if you will, set the precedence for the night as Sony appeared dead set on giving hardcore Playstation fans what they have been most desperately begging for in years past.

Many Playstation fans had given up hope, left to dust off their old PS2 controllers and reminisce the true greatness that was both Ico and Shadow Of The Colossus. However, as I watched that single feather flawlessly drop in the darkness to the ground in the waking seconds of the E3 press conference, I knew The Last Guardian is back and hopefully never disappearing again.

A young protagonist seemingly lost in this vast world, discovers companionship with an enormous griffin-cat-dog creature, appropriately named Trico, who aids him on his journey. The trailer shows off quite the teamwork between the creature and the boy, as they meticulously make their way throughout the world together. You can see early on, although they apparently cannot clearly communicate, they definitely understand each other on an emotionally physical level, encouraging each other along the way.

The Last Guardian first made its appearance in 2009, as it debuted showing that trademark Fumito Ueda look and feel. Ueda has a track record that oozes with success with this same exact format in the past and his partnership with Sony always seemed rock solid. So what went wrong with The Last Guardian over the last several years? Why in the world did this game with this creator have such a hard time getting its wheels rolling. All I know it looks as if they are serious about it being here to stay this time. Ueda is clearly still at the reigns and Sony appears confident we will have this game in our hands in the year 2016.