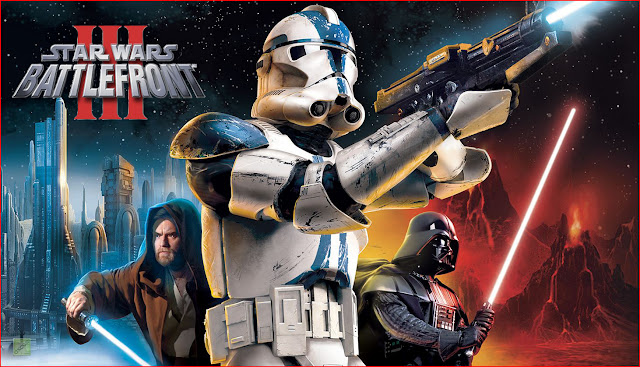 There is a story in gaming that has been brewing for a few years. What happened to Free Radical and what happened to the game they were developing for LucasArts. For those that know some of the back history know that Free Radical was contracted as the developer that would handle bringing LucasArts' big Battlefront series to the third installment. Fans were excited when the TimeSplitters dev was announced as the developer of the beloved Battlefront franchise's third mainline game. However, numerous delays (that were forced by the LucasArts side) halted the production of the title and ended up draining Free Radical of resources and allowing the game to hit default.

Ever since the silent cancellation of the game there have been several petitions launched online to see the game come out. Whether there was some real problem during development or LucasArts just didn't want to shell out the massive amount of royalties that would inevitably rack up for Free Radical remains to be seen. It should be noted that LucasArts was in fact starting to see profits fall and financially wasn't as sound as they had been in the past.

One petition was launched on Facebook and has found decent success. I recently sat down with the admin of the page and chatted a little bit about the goals of the petition and some history.

Just1MoreLevel.com: Tell me a little about you.

Connor Heggie: Well I’m 19 years of age from Newcastle Upon Tyne, England. I have just finished college a few months ago after successfully passing my Extended Diploma in Creative Media. I have [a] huge interest in film, I want to progress in a career in film/television. I’m more of a film fan than a Star Wars fan I like the films [for] it’s entertainment, my favourite Star Wars film though would have to be 1980’s “The Empire Strikes Back”. Brilliant plot, character development, and the ending [of] one of Cinema’s greatest endings. The Hoth Battle feels real since it was miniature models [being] used. I feel like I could touch it, feel it, that’s how Battlefront III should feel, those little moments in the Star Wars films where you are drawn into the story. Battlefront itself; I played it at a mates back in 2004, [even though] I’m not a huge fan of war games but this got me hooked into the Battlefront [series].

J1ML: What would you say is the single most important reason you (personally) want to see Battlefront III release?

CH: Well since the second installment I wanted a third one. Though after a few years and with the release of the Xbox 360 Battlefront started to fade away, [it] wasn't until the near end of 2011 [that] it came back, as I was having a clear out and was removing some old VHS's and old Xbox games. I found both Battlefront & Battlefront II and started playing them again, although there was no live, found out multiplayer was stopped a while back. Which was a shame. And checked the internet to see if there was a third one and there wasn't. I then came across these campaigns for Battlefront III, most were basic, were very low on likes and they didn't seem to make an effort in my opinion, there as one with over a 1000 likes but it had been up since 2009. So in early 2012 I thought I'd give it a try and use my media skills I had learned over 5 years to use. The Battlefronts were one of the few games I actually played quite often. And now I see that there is a lot of room for improvement to the game since the last one. The shooter genre is there and it's successful [and] Battlefront III could do well with this audience.

But for me personally I'd like to see a gritty, mature Star Wars. The movies, yes they're family films, but there is war, battles and fighting. Battlefront III should show [the] horror of war, take the World Wars of the 20th century, take a look at history, a few missions could be based off [of] the battles from the World Wars. The dogfights in Star Wars are based off footage from air battlefront from these wars. At least a 15 maybe. I'd like to relive the memories of playing the first two while playing Battlefront III.

J1ML: Do you have a goal for how many likes you want to achieve before the end of the year? You're already over 6000 and you said you have only been at it since this year. [Editor's note: The interview took place before the Facebook hit over 7000 likes]

CH: This is hard due to the fact that no other Campaign has been successful. Battlefront in 2004 sold 4.5 million units. [While] Battlefront II sold 6 million units. So the amount of likes in my opinion would have to be larger, at least between 7.5 million and 10 million. Yes, very large amounts. At the moment we're were setting monthly targets, were fast approaching 7000 likes, but I was hoping that we would reach our target of 10,000 likes. I would like to get into the hundreds of thousands, though it would be brilliant to get close to the first million, but realistically hopefully around 50,000+. As I think if we can get over 10,000 people may look at us more professorially as we've gotten over the 10,000 mark.

It is quite amazing how far we've come since January, I'd say this is thanks to the people that have joined the campaign and speaking out to other sites has helped as well. This gets people aware and then more people know of you and it starts to spread. It's like a domino effect.
J1ML: Have you attempted to contact any of the people who were/are involved with LucasArts that were also involved in the process of developing Battlefront III?
CH: Yes I have, though I couldn't find a like “Do you have a question” [or] email addresses as their website seems to lack that; it was most tech support, but I tried them and no reply. Plus there's this thing someone put up a little while back with this “email George Lucas” thing, I tried that but again nothing. I have tried some gaming site including yours [Just1MoreLevel.com], got in touch with Clevver Games and they said they could do something on it in the near future, which will be good. It would be good to get into contact with the people who were developing it before the game got canned; as we could find out what was developed, any plans they had and why it was canceled.
J1ML: Would you like to take this time to make any final pitches to the people reading? What can they do to help the movement of the petition?
CH: Well Battlefront started it all, we got to play as the troops of armies from Star Wars, drove their machines of war and battled on locations we had seen in the films. The second installment introduced us to space combat such as dog-fighting, to play as a Jedi/hero and more Battlefronts. Now Who Else Wants Star Wars Battlefront III ?

I told you that I've done media for 5 years now and have now finished my college course. During college my tutor spoke of audiences and how important they are to "the product" in this Battlefront III, but lets widen that audience. It should appeal to more from the die-hard Star Wars fan to the shooter genre audience and in-between. After Battlefront III, the next biggest demanded Star Wars game for a sequel is Republic Commando. This was released back in 2004. Why not add Commando elements such as Commando Units, Commando multiplayer mode, Commando singleplayer missions. Call of Duty has taken advantage of the zombie genre in World at War & Black Ops. So why not Death Troopers, a multiplayer mode based around the Star Wars horror novel. The campaigns wish list is full of new ideas for 3rd Installment each widening Battlefront III's audience more. Here are a few suggestions

•The ability to pick up weapons fallen on the battlefield, to add to this the abilities to lie down like in Battlefront and to be able to melee enemies then to close. Also depending on how you fought and you took apart in battle, your armour if you survived should be battle-worn and a choice between 1st and 3rd person.

•To have Destructible Environments so the effects of war can be seen, so cities can fall and be in ruin, forests will burn and landscapes scorched. This shouldn’t just be limited to land, space should have it as well. In fact the factions Fleets should also be Destructible Environments. So that there can be damaged and torn like in the films. If the player is inside a ship whilst being attack you should experience the force of the blasts depend on there you are.

•With the release of Star Wars The Old Republic maybe the addition of The Old Republic and the Sith Empire as new Factions bringing with them new Content like New Planets/Locations, Weapons, Units and Vehicles.

•Not only should there be the Faction vs Faction Battle but some Planets may have a 3rd Party. For example if you were on Kashyyyk playing as the Republic not only would you fight alongside the Wookiees but you could have the chance to also play as them and use their Vehicles like on Revenge of the Sith. So if a Battle was on a Planet with a Race on it, that Race can be played as in the Battle.

•Battles from Land to Space should be Continuous No Cut scenes for going between Land and Space. This would allow for great Land to Space Battles.

•Death Trooper Mode - Players face off hordes of Undead like from COD but in a Star Destroyer with is a destructible environment but have it with two modes survival and escape. Survival – last as many rounds as possible. Escape take on hordes of undead as you try to repair and escape the star destroyer but if you don’t kill off all the undead in the transport you all die in a cut scene as one escaped with you.

•Dark Trooper Mode- Like the CoD Juggernaut, a player will be selected to play as a Dark Trooper while the other players have to take him out. Whoever kills the Juggernaut will become the new Juggernaut.

And many more. But to help, just spread the word. The more people that know and join [the campaign] the bigger the impact we can have and show the true demand. So share the campaign on blogs, Facebook, YouTube, etc. it all builds up. If the amount of people talking about it grew because of the campaign being shared and videos of it were being made informing others about it, it leads to the attention for large game companies & game sites and the pressure builds as it grows. So basically spread the campaign like a “plague” so [it] gains more attention.