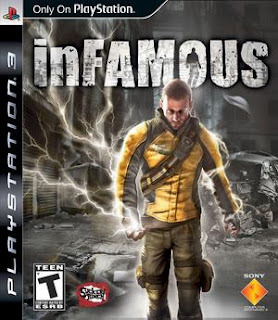 Playing as Cole McGrath in inFAMOUS became one of the most enjoyable experiences I've had in video games in a very long time. It didn’t necessarily start out that way because the graphics are horrendous to say the least. While graphics never break a game for me they are part of the first impression we all get when the game starts playing. Of course once I got past how bad the characters looked and how the world was filled with invisible walls/areas of black holes. I started to really enjoy the game. Everything was very fluid and began to really show off how unbelievably fun the gameplay was and inFamous does not disappoint. Jumping around, firing lightning at your foes, grinding the rails of the train tracks/power lines throughout the city, sniping enemies with condensed lightning, calling up massive thunderstorms. You really feel like you’re in the shoes of an actual superhero (or villain). And to top it all off you have the story that is ever evolving based on your good or evil decisions in the game. You get to mold the ending to your liking as you play the game. Unlike other games though, that give you that same “molding” feature, I didn’t feel like I was being given a “cookie cutter” good ending/bad ending.
Just to give you an example, I played the entire game as a good guy. Making sure the citizens had food to eat; the bandits were leaving the people alone, restoring power to the business and residential areas of the districts. All in the name of being the hero, but everything changed once I got near the end. I made one decision that altered the ending for me. Instead of being pissed off at what happened, don’t worry I was mad till the ending actually happened; the story unfolded in front of me in a way that I haven’t seen any other game do. When Cole was explaining “his” most recent decision (I won’t spoil anything if you haven’t seen it) out loud and the entire lead up to that moment. It was like Cole was reading my mind then. He explained in such detail that it all made incredible sense. While I finished the game as a villain, something I didn’t want to be even after I knew my choice would cause a lot of karma damage, the story got wrapped up in a way that I walked away fairly proud of my character.
The ending I got ultimately wasn’t the targeted story arc I wanted, but I will save a second play through for a later date. I wouldn’t say the game is overly or unfairly difficult, but you might die often if you don’t fully understand the objectives placed in front of you. Every decision you make will add either good or evil points to your continuously running Karma meter. It’s this meter that will allow you to evolve your character into the super hero or the evil villain and special quests will pop up on the map that ties to your Karma. So if you’re good you get good quests to unlock new abilities for your hero and vice versa.
Don’t worry about not knowing when you can get points for your meter. You will receive good points if you don’t kill enemies and you can get additional points for just handcuffing them to the ground. If you are going for the villain role, suck their life force out of their bodies while they are defenseless on the ground. It’s very easy stuff here. See a guy being hung upside down and tortured by people? Help him down for good points or kill him for evil points. Again, don’t worry about not knowing how to get the points. Everything you do leads to improving you Karma meter whichever way you want it to go.
I pre-ordered and picked up the Hero Edition of inFamous 2 a couple months ago. So that will find its way into my playlist at some point and I will see how my decisions here in the original game transform the story of the sequel for me/Cole. All of this was really a turning point for me. I never was a fan of Sucker Punch, I didn’t think they were bad or anything; it’s just the Sly Cooper games didn’t “click” with me. Infamous is a completely different matter altogether though. I felt like a superhero while playing. By the end of the game I was combining so many different aspects of the game together like I was a pro. Using everything around me to juice me back up and keep going for more.  If you want to have a game that you can sit down and get a healthy amount of gaming out of; inFamous is the game to get. Action/Adventure and great story telling all wrapped into a wonderful package that a first play through might squeeze 15 to 25 hours out of you.
SCORE : 8/10