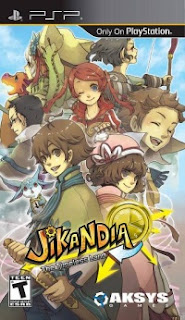 Developed by Opus Studios/Idea Factory and published by Aksys Games here in America this is an action-role playing game set in the fantasy dimension of Jikandia. Nine friends find themselves in this world. There isn't much of a story told in the demo as it focuses on the game play. Unfortunately the game play is dull and boring. You control three characters directly in a 2D side scrolling action-rpg format. Enemies appear on screen and you can engage in combat just by pushing one of the face buttons on the PSP (Triangle, Circle, Square and Cross). Triangle and Square correspond to the the other character's weapons, circle is for jumping and X has the main character use his (or her) weapon in combination with the other party members. Every level has a time limit. Treasure chests have a certain amount of time to be useful and even some enemies will give you special items if you beat them in under the time limit.

There isn't much to the combat besides just mashing buttons. Of course if you enjoy retro styled 2D action rpg platformer dungeon crawling games then try it out, but I don't recommend it. 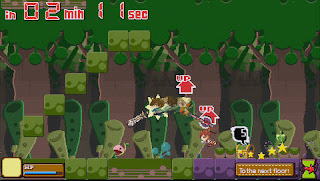 All in all this demo made me decide not to buy the game. While a demo is just that, a demo, it is a very close representation of the final game. Considering the game came out shortly after the demo hit PSN I'm sure there isn't much (if anything) changed from the demo to the released game. If you had or have any interest in this game, play the demo first.